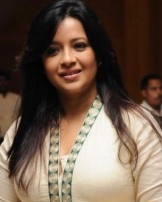 Reema Sen is an Indian actress and model, who primarily worked in the Telugu and Tamil cinemas.

Reema Sen was born in Kolkata, into a middle class family in 198. She completed high school from Calcutta, after which her family moved to Mumbai. In Mumbai, she began her modelling career, appearing in a number of advertising campaigns.

Reema moved from modelling to acting soon after. Her first film was a low budget film, Chitram, in Telugu, in which she acted opposite Uday Kiran. Later she appeared in the Tamil film, Minnale, which was very successful. She tried to enter Bollywood but her first Hindi film Hum Ho Gaye Aap Ke flopped, and she decided to continue working in Tamil cinema.

Her next movie Rendu was also a successful movie in the Tamil cinema. People found her facial expressions in the film Thimiru endearing and her horrific turn in Vallavan exposed her abilities in the histrionic department.

In April 2006, a Madurai court issued non-bailable warrants against Sen and Shilpa Shetty for "posing in an obscene manner" in photographs published by a Tamil newspaper. The report stated that the two actresses had failed to comply with earlier summonses for the same reason, hence the issuance of the warrants.

The petitioner submitted that the paper had published "very sexy blow-ups and medium blow-ups" in its issues December 2005 and January 2006 issues, and which allegedly violated the Indecent Representation of Women (Prohibition) Act 1986, Young Persons (Harmful Publications) Act 1956, and the Indian Penal Code Section 292 (Sale of Obscene Books). The petitioner further demanded that the images should be confiscated under the terms of the Press and Registration of Book Act 1867.

Sen responded that she had not received any court summons and also discounted the charges. She further claimed that the pictures were freeze-frame shots from a recent movie that only exposed her navel. "As far as my photographs go, what is obscene about it? If navel-showing is obscenity, then our traditional Indian outfit - the traditional sari - should be banned in the first place."

In January 2007 outgoing Chief Justice Y.K. Sabharwal confirmed that Sen had written to him in order to enunciate guidelines against frivolous lawsuits against artists, but refused her plea on the grounds that she should have filed a formal petition instead of writing a letter.