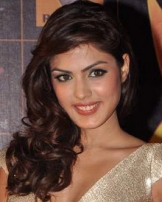 Rhea Chakraborty is an Indian film actress and a VJ on MTV India.

Rhea took part in MTV India's show TVS Scooty Teen Diva in 2009 and came out as a runner up of the show. She then gave an interview at MTV Delhi wherein she was asked to stay back and audition for a VJ spot.

She hosted MTV shows including Pepsi MTV Wassup and Gone in 60 seconds. She has also been hosting several other shows of MTV like Fantastic Five (with Ayushmann Khurrana), TicTac College Beat Teacher's Aquanoon Party among others.

She started her film career starring opposite Sumanth Ashwin in the 2012 Telugu film Tuneega Tuneega.