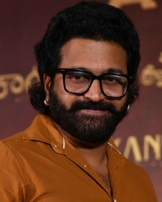 Rishabh Shetty is an Indian director and actor who primarily works in Kannada cinema. He launched his career in the Kannada film industry by working with the director of the Cyanide movie, A. M. R. Ramesh. He received multiple awards, including the Filmfare, National, and SIIMA ones. His films, including Kirik Party and Kanata, are well-known.

In the Udupi taluk of Kundapura, Rishab Shetty was born on July 7, 1983, to Bhaskar Shetty and Lakshmi Shetty. He attended Kundapura for his formal education before enrolling at Vijaya University to study B.Com.

In Kundapura, he performed in yakshagana plays to begin his theatre career. While attending school in Bengaluru, he actively participated in dramas. His efforts were recognized, and his achievement in these dramas gave him the trust to continue acting as a profession. Rishab Shetty tied the knot with the software professional Pragathi Shetty on February 9, 2017, in his hometown of Kundapura.

Shetty later worked with Arvind Kaushik on a TV show before making his acting debut with Rakshit Shetty in Thuglak. In Pawan Kumar's Lucia, Rishabh had a small role as a police officer.

In the film Ulidavaru Kandante, which was directed by his friend Rakshit Shetty, Rishab had a significant part. He has a solid theatre background and has participated in yakshagana.

His directing debut, Ricky, received favorable reviews from both critics and viewers. His most recent film, Kirik Party, was released in 2016 and quickly gained a following after its successful theatrical run.

The movie Kantara, in which Rishab Shetty both directed and played the lead, was launched in 2022. Kantara, the foremost-grossing Kannada movie ever made, was a huge success in 2022.

The film was originally only set to release in Kannada, but after receiving excellent reviews and amassing sizable ticket sales, it was made available in four additional Indian languages. The film gained extensive acclaim, with many artists and critics applauding both it and Shetty's portrayal of the lead character.