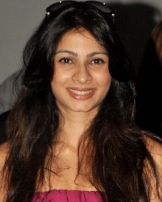 Tanisha is an Indian actress of Bengali-Marathi descent. Tanisha comes from a prominent  family of the Indian film industry, which has been famous in Bollywood since the 1940s. Her relatives include paternal grandfather Sashadhar Mukherjee, uncles Joy Mukherjee and Deb Mukherjee, great-grandmother Rattan Bai, grandmother Shobhna Samarth and aunt Nutan.

Her father is Somu Mukherjee and her mother is actress Tanuja. Popular multi-award winning actress Kajol is her sister and actor Ajay Devgan is her brother-in-law.

Tanisha's paternal grandfather was a film director and producer who had left a great legacy in the Bombay film industry and was regarded as a stalwart. His wife Satirani Devi, Tanisha's grandmother was the sister of three great film personalities Ashok Kumar, Anup Kumar and Kishore Kumar.

She is the younger sister of an award winning actress Kajol. She was dating Uday Chopra whom she had met on the sets of Neal N Nikki but they broke up in 2007.

Tanisha started out her career as a VJ in 1995 for Channel V. She used to anchor the famous show called BPL Oye. She made her debut in films with "Sssshhh..." opposite Dino Morea; however, the film failed to break even at the box-office, and it went unnoticed. Her following releases didn't do very well at the box office either.

Tanisha's first hit film was Ram Gopal Varma's Sarkar, which starred Amitabh Bachchan and his son Abhishek Bachchan. In 2006, Tanisha played the female lead character of Nikkita "Nikki" Bakshi in Neal N Nikki opposite her boyfriend Uday Chopra, which failed to make an impact at the box office.

Her Tamil movie Unnale Unnale opposite newcomer Vinay Rai was successful at the box-office; she portrayed a stereotypical modern girl cast against Sadha who played an orthodox girl. The film is remembered for being the last film of director Jeeva.