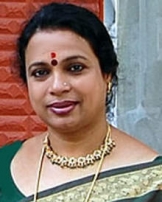 Umashree, or Umashri, is an Indian theatre actress and character actress of the Kannada Film Industry also well known for politics. She was a Member of the Legislative Council in Karnataka. She has played varied roles as a character artiste with equal finesse and aplomb. However, she is most famous for her portrayal of comic roles. Her range in acting is unparalleled - mainly due to her stint in stage plays - and she has acted in more than 325 Kannada movies, of which her portrayal in Swabimana, Anjadagandu, Putnanja, Yaru Hone, Laalihaadu, Minchina Ota, Mani, Ranga SSLC, Kotigalu Sir Kotigalu, Yaarige Saalutte Sambala, Kurigalu Sir Kurigalu, Tumbida Mane, Sangya balya,Tayyavva, Monalisa, Veeru, Kotreshi Kanasu, Chellata, Bhairavi, Malla, Kattegalu Sir Kattegalu, etc., are a few to be appreciated.

She has 31-year-long experience in village, amateur, mythological and professional drama. She has acted under the direction of great theatre directors like German director Fritz Bennewitz, B.V. Karanth, Girish Karnad, C. G. Krishnaswamy, R. Nagesh, Nagabarana, etc. She has been a part of many eminent theatre groups of the State and is an active member of Rangasampada Amateur Theatre group of Bangalore. She has performed nearly in hundred different plays in Amateur, Professional, Rural and Industrial theatre sectors. As of date, more than 6000 shows have been performed by her. She has been awarded with many awards and prizes.

Apart from these, she has also received more than twenty Best Actress awards in different Industrial Competition Plays.

She started her movie career with an inconsequential role in the movie Anubhava opposite Kashinath in the late 1980s. Even though she had only a supporting role - which had a comic streak and also grey shades - in the movie, her acting was appreciated by one and all. She even bagged an award for the role. But later she was branded for same kind of comedy roles bordering on the line of indecency with double meaning dialogs. Initially, she formed the best pair with N. S. Rao and with his unique kind of dialog delivery, they both regaled the Kannada audiences in many movies. Later, after the actor's demise, she was paired with Mukhyamantri Chandru, Doddanna and Karibasavaiah with whom she formed a great pairing and shared a unique comic timing as well. Her acting in the movie Kotigalu Sir Kotigalu as Muniyamma a limp washer-women was enjoyed thoroughly by children as well as grown-ups.

The role in the movie Puttananja changed everything for Umashree. Her portrayal of an 80-year-old grandmother in the movie made everyone sit-up and notice her immense talent, even though she was praised for her performances in movies like Tayyavva, Amrutha Ghalige, Sangya Balya, etc. Later, she was provided better roles which had immense scope to perform and display her talent by many directors such as S. V. Rajendra Singh Babu, Yograj Bhat, etc. Her portrayal as an aged prostitute trying hard to save her daughter from the flesh-trade in the movie Mani was exemplary and won her Karnataka State award for Best Supporting Actress in the year 2005. She is the only Kannada actress to receive Karnataka State award/prize five times in a row. She is also the recipient of the prestigious Rajyothsava Award Gold Medal.

She is currently acting in various movies that have offered her better roles. She is interested in politics and was an MLC (Member of Legislative Council) in the Karnataka State Government and currently a sitting President for Other Backward Class Department in Karnataka Pradesh Congress Committee. She had also contested in the 13th Karnataka State Assembly elections from Terdal constituency in Bagalkot district, under an Indian National Congress Congress ticket. But she lost the election with a reasonable margin.

Umashree's husband had deserted her at a very early age and had married someone else. She had single-handedly brought up her two children. That is the reason she took to acting - to ably support her family. Her elder daughter Gayathri is a doctor and has completed her Master of Dental Surgery and her son Vijayakumar is an Advocate, also completed his Post Graduation in Master of Laws from Australia. She is also involved in many social activities in upliftment of rural and suppressed women and has done many stage-plays highlighting the issues they face, in many interior villages of Karnataka. She also brought these issues to notice of the Karnataka government as a sitting MLC.