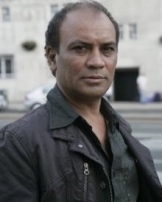 Vipin Sharma is an Indian actor born in New Delhi. He is a graduate of National School of Drama, New Delhi, India and the Canadian Film Centre, Toronto, Canada.

His first major role was as Nandakishore Avasti in Taare Zameen Par (Like Stars on Earth). For his role, he was nominated for a 2009 Star Screen Award for Best Supporting Actor. Post Taare Zameen Par Vipin has become an established actor in Bollywood. His work in Yeh Saali Zindagi, Saheb, Biwi Aur Gangster broke his stereotypical image of a stern father from TZP and has established him as a new entrant in Bollywood to watch out for.

Since then he through his films like Paan Singh Tomar, Gangs Of Wasseypur, Love, Shuv Te Chicken Khurana has become a name closely associated with some of the best films made in the last years.

He further surprised the audiences in his new film Inkaar in which he plays a character which was hardly in the initial screenplay.The film is directed by Sudhir Mishra and has Arjun Rampal and Chitrangda Singh in the lead roles.