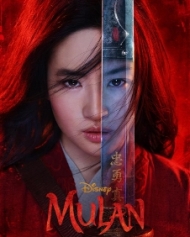 Mulan is an American historical war drama film based on the Chinese legend Hua Mulan. Nick Caro directed this official adaption of the 1998 Disney movie of the same name. Starring Liu Yifei in the titular role, the film features Chinese superstars Donnie Yen and Jet Li in supporting roles.

Chinese Emperor issues a decree that one man per family must serve in the Chinese Imperial Army to protect it from Huns. The enthusiastic and brave Hua Mulan, the eldest daughter of a venerated warrior steps in to take the place of her ailing father.  She disguises herself as Hua Jan with man identity. Being tested at every step, She has to harness her true potential.