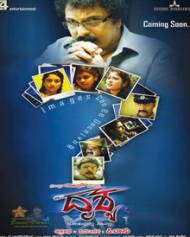 U | Thriller
Release Date : 20 Jun 2014
Cast : Ravichandran, Navya Nair
Director : P. Vasu
Synopsis
Drishya is a official remake of Malayalam superhit movie Drishyam and it is a Family entertainer, In which crazy star Ravichandran potray's the character of a common family man struggling for daily breads.

We can see Ravichandran completely as a down to earth character without any stardom. Yesteryear actress Navya Nair will seen pairing opposite with Ravichandran.

Ravichandran is an orphan by birth, he discontinued his studies after fourth. Due to his hardworks he earned 5 acres of Tea plantation. later he married a tenth failed Navya Nair from a poor family. Ravichandran and Navya Nair is blessed with two daughters, thery are very good in studies.

He shares a cordial and amiable relationship with his two childrens. Suddenly all of his...