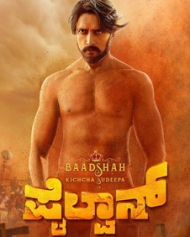 Kichcha (Sudeep) is an orphan. Sarkar (Suniel Shetty), a village chieftain, takes Kichcha into his shelter and nourishes him like a father. As the bond between the duo grows stronger, Kichcha learns about Sarkar's dream of winning a boxing championship and pledges to fulfil it. Meanwhile, he falls in love with a businessman's daughter, Rukmini (Aakanksha Singh). Both get married in due time.

Rukmini's father upset with this, seeks Sarkar's help and the latter promises that Kichcha will stay away from Rukmini thereon. But Kichcha fails to keep the promise of Sarkar and eventually leaves the village with his wife, Kichcha settles in a different village and undergoes a series of new problems. Will Kichcha reunite with Sarkar? Will he fulfil Sarkar's dream? That forms the rest of the plot.