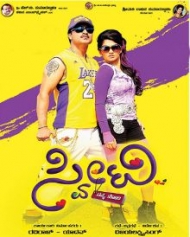 Sweety is the second film from Radhika Kumaraswamy’s home production Shamika Enterprises after ‘Lucky’ starring Yash and Ramya.  Actress turned director Vijayalakshmi Singh has penned the story of the film apart from directing the film. B A Madhu has penned the story of the film and Vijayalakshmi along with Ramani has scripted the film. Arjun Janya has composed music while, Ajay Vincent is the cameraman.
Story In Detail:
Sweety is a romantic love story and stars Aditya, Radhika and others in prominent roles. Priya (Radhika) is a middle class girl working in a software company and is averse to rich people for some reason. There she happens to meet Siddarth(Aditya) who is in madly love with her. Siddarth is the son of a rich woman called Vasundhara Devi. Though Siddarth is very rich, he lies to Priya that he is very poor as he knows Priya’s aversion towards the rich. But Priya comes to know Siddarth’s status and rejects his love.
Why doesn’t Priya like rich? What makes her decide that all the rich are the same? How does Siddarth make her understand that all rich are not the same? Will Priya accepts Siddarth’s love? Watch the film to get answers for all these questions.