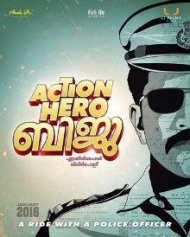 A 1.59 minutes long hilarious and extremely promising trailer released on Jan 29th, from the trailer itself we can make sure that Action Hero Biju will be nothing less...