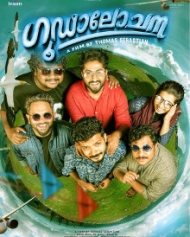 Goodalochana will feature Dhyan in the role of Varun, a young man who is eager to make some money quickly.

Goodalochana is set in the land of Calicut city and it takes the audiences through the life of 4 youngsters named Varun, Ajaz, Jamsheer and Prakash. All the four of them are the representatives of the jobless youth but the aim in their life is to make money and reach heights. Finally, they come up with an idea, which probably has the element to change their life. What happens rest has been narrated in Goodalochana.