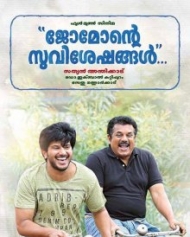 This is for the first time Dulquer is pairing with Anupama Parameswaran (Premam fame) and director Sathyan Anthikkad.

The movie is all about a careefree boy Jomon (Dulquer Salmaan), who is the son of a rich businessman from Thrissur named Vincent (Mukesh). The movie also depicts a father-son relationship in the most entertainment way.

The teaser of Jomonte Suvisheshangal, which was released on November 26, was well-received by the audiences and critics. As of now the teaser has got a record...