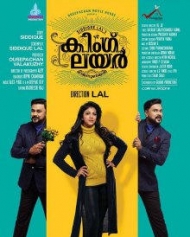 2 hrs 38 mins | Comedy
Release Date : 02 Apr 2016
Cast : Dileep, Madonna Sebastian
Director : Siddique
Synopsis
King Liar is the title of Sidhique Lal’s come back movie with Dileep in the lead. In this film Dileep plays a young guy who opens his mouth only to eat and telling lies.

Premam sensation Madonna Sebastian will star opposite Dileep in King Liar. Movie is inspired by Dany Boon's 2014 comedy film Supercondriaque, it revolves around the character Sathyanarayanan(Dileep), who is diagnosed with pseudologia fantastica.

A 1.58 minute long trailer hints that movie will be an out n out comedy entertainer. Movie all set to release on 1st week of April.