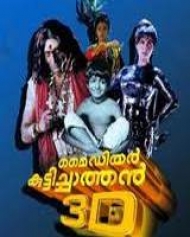 Adventure
Release Date : 31 Mar 2011
Cast : Prakash Raj, Urmila Matondkar
Director : Jijo Punnoose
Synopsis
My Dear Kuttichathan 3D the greatest hit movie is coming again for the third time with great modifications in story. The movie which was released in the year 1984 by Jose Punnoose who is popularly known as Navodaya Appachan.

In this therd part there will be an extra duration of 25 minutes. This is a first 3D movie in India. It was released for the second time in 1997 with small additions of characters in the story.

In the 3rd Part of the film My Dear Kutti chathan Tamil actor Prakash Raj, Bollywood actress Urmila Matodkar will be acting. This film will be translated into all popular languages such as Hindi, Tamil, Telugu.etc.