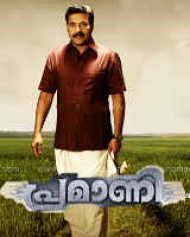 U | Action Drama
Release Date : 26 Mar 2010
Cast : Mammootty, Sneha Prasanna
Director : B Unnikrishnan
Synopsis
Pramaani movie tells the story of two villages. One village was under the control of Viswanatha Panicker (Mammootty) and other was under Castro Vareethu. Viswanatha Panicker is the Panchayat president since 25 years. He has acquired immense wealth with the position. He has got many deeds of lands pledged by the poor people in the village.

But Castro Vareethu was totally different. He was a communist and wanted his villagers to live peacefully. Viswanatha Panicker did all sort of mischief against Vareethu. Meanwhile, a lady took charge as Panchayat secretary (Sneha). She tried to expose panicker's corruption.