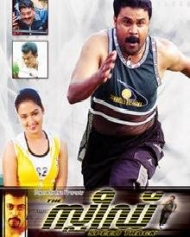 Arjun (Dileep) is a young athlete who is all set to create history with his speed and spirits. He is presently going through tough times, mentally and financially following his father's demise. He has got a share of tension for his family who badly needs him to keep them going.

Finally with the support of some of his friends, he decided to go back to college and pursue his dream and career. Everyone in the campus except Tinu (Riyaz Khan), who was the unchallenged hero hailing from bigger family, welcomed Arjun's comeback.

Arjun who made consistent performances on the track put Tinu on the back seat, as Arjun become the heartthrob of many within a short time. These defeats were more than something Tinu could handle and started taking it on Arjun on a very personal level apart from sporting spirits. This leads to nasty street fights between the two which resulted in the principal (Captain Raju) calling both of them for talks. The principal challenges them both to take it on the field rather than going at each other. And both then prepares to settle the scores in the big race that follows.