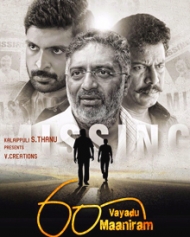 60 Vayadhu Maaniram is a Tamil drama movie, directed by Radha Mohan. The cast of 60 Vayadhu Maaniram includes Vikram Prabhu, Prakash Raj and Indhuja in the lead roles.
60 Vayadu Maaniram takes us through the life of a 60-year-old man named Govindarajan and his son. Govindarajan suffers from Alzheimer's disease and has been admitted to a care centre by his son.
Things turn turtle when Govindarajan goes missing while he's on one of the outings with his son and what happens next has been narrated in 60 Vayadu Maaniram.