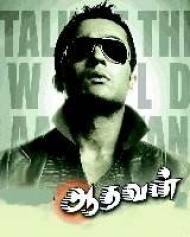 U | Action Romance
Release Date : 17 Oct 2009
Cast : Suriya Sivakumar, Nayantara
Director : K.S. Ravikumar
Synopsis
Aadhavan, starring Suriya and Nayantara, movie is shaping up as a complete entertainer with an extra dose of comedy. Suriya will play a negative lead role in this movie.Surya joints as a servant in a mansion owned by the rich woman Saroja Devi who has four sons. Nayantara is the daughter of the elder son. Surya who comes into the house to take revenge falls in love with Nayantara and the happenings thereafter forms the movie.