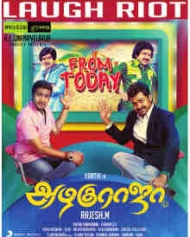 All In All Azhagu Raja

U | Comedy Romance
Release Date : 02 Nov 2013
Cast : Karthi, Kajal Aggarwal
Director : Rajesh.M
Synopsis
All in All Azhagu Raja is an upcoming Indian Tamil romantic comedy film written and directed by M. Rajesh. It will feature Karthi, Kajal Aggarwal and Santhanam in the lead roles.
Story Line
The movie story was set under the small town Ambasamuthiram, Azhagu Raja (Karthi) one only son for Prabhu and Saranya, he runs local channel namely "All in All" . He has Santhanam as his assistant, he plays adamant role and because of Santhanam, Karthi faces some problem.
Sithra Devi (Kajal) tries to make it big in performing arts(singing and dancing) and Karthi makes fun of her and discourages her saying she is not good enough. Finally the hero is proved correct as Kajal fails in every single thing she...