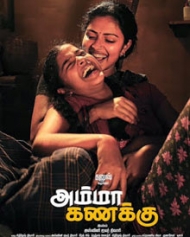 Amma Kanakku is a Tamil drama film written and directed by Ashwini Iyer Tiwari. A remake of the 2016 Hindi film Nil Battey Sannata, the film stars Amala Paul, Revathi and Samuthirakani in the lead roles. Principal photography of the film commenced on 7 January 2016 in Chennai.
Amma Kanakku Plot:
Amala Paul, after losing her husband in an accident, pins all her hopes on her daughter, played by Yuvasri.
Her only dream is to provide her daughter with good education. However, Yuvasri shows little interest in education. Her rational standpoint being, her mother, who takes up odd jobs to make ends meet, cannot afford her higher education.
Yuvasri continues to focus more on television soaps and cinema, which demoralizes her mother. But Amala is in no mood to give up and does something unexpected to make her daughter realize the importance of education.
View Interesting Photos From Amma Kanakku
Production
In November 2015, Ashwini Iyer Tiwari agreed terms to direct a remake of her Hindi film, Nil Battey Sannata in Tamil, for producers Dhanush and Anand L. Rai. Dhanush had been shown a preview of the film by Rai, during a visit to Mumbai in September 2015 and the duo chose to co-produce the film, with Ashwini Iyer retained as director.
Amala Paul and Revathi were signed on to play the leading roles, while Samuthirakani also accepted to portray another pivotal role in the film. The film began production during early January 2016, with a launch ceremony held in Chennai. On January 16, Dhanush roped in Ilaiyaraaja as the music-director of the film.