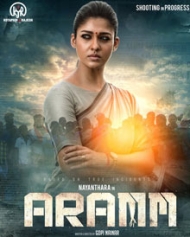 Aramm (aka) Aram is a Tamil movie direction by Gopi Nainar, will be produced by KJR Production house. The ladu superstar Nayanthara plays a lead role in this movie. The title and first look was announced on Nov 18th at 12:00 Am as a birthday treat to Nayan's fans.
Story in Detailed
Aramm highlights the issue of water scarcity, that happens in a village and how it affects their source of income, which is agriculture. Nayantara stand for the village people and how she deals the influential people, who has the government in hand. The rest of the story narrated with interesting screenplay and powerful dialogues.
Cinematography is by Om Prakash and stunts by Peter Hein. Lalgudi Ilayaraja will be handling the art direction.
View: First Look Posters Of Nayan's Aramm