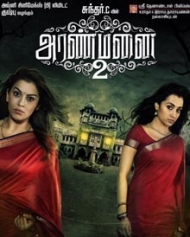 Aranamanai 2 is a sequel to Aranmanai movie directed by Sundar C. The film stars Siddharth, Trisha and Hansika Motwani in the leading roles, while Soori, Kovai Sarala and Manobala will be seen in supporting roles.
Aranmanai 2 Plot:
Siddharth is made to come back to his village along with his fiancée, played by Trisha, in order to take care of his father, played by Radha Ravi, who is hospitalized after a ghost attack.
The palatial house they live in is apparently haunted and the evil spirit succeeds in scaring everyone residing in it. This, until Sundar C arrives to throw a light on who the evil spirit really is.
We are then taken back in time to know more about the ghost in its human form. The rest of the story revolves around finding who the ghost is and the means to drive it away from the troubled family.
Production
The project's progress was first officially revealed after Trisha had tweeted her involvement in the sequel and revealed that she would feature alongside Siddharth in the leading roles.
Hansika Motwani subsequently also announced that she would work in Aranmanai 2. Poonam Bajwa was later selected for the role. Soori was selected as a comedian replacing N. Santhanam who was part of the first film. Kovai Sarala and Aadukalam Naren were also added to the cast to portray supporting roles.
The team began the first schedule in mid-June 2015, with scenes involving Hansika canned.
The film's second schedule was began in July where portions involving Trisha and Siddarth were shot. A song sequence involving dancers from Kerala and a cast including Siddarth, Trisha, Soori and Kovai Sarala was also canned.
The team created a 103 foot statue of goddess for a song sequence. The principal photography of the film came to an end in mid September and the post production works started.
Hiphop Tamizha composed the music for Aranmanai 2. Independent singer Kaushik Krish (who earlier recorded "Kannala Kannala" for Thani Oruvan, also composed by Hiphop Tamizha) announced in September 2015 that he was working on a single track from the album.