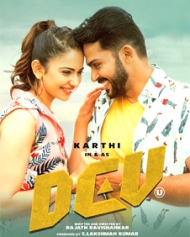 Dev is a Tamil action adventure thriller movie written and directed by debut director Rajath Ravishankar. The movie stars Karthi and Rakul Preet Singh in the lead roles. Harris Jayaraj composed music for this movie, while cinematography is handled by R. Velraj and editing is done by Anthony L. Ruben. The movie director Rajath Ravishankar who previously served as the assistant of Anurag Kashyap.
Dev revolves around how a carefree adventure-seeker is forced to take up a big challenge when his friend introduces him to an ambitious businesswoman who is obsessed with her work and has no time for anything else.