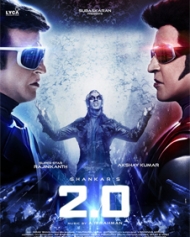 2.0, 2.o (aka) Enthiran 2 is a Tamil action sci-fi movie direction by Shankar. The movie cast has Superstar Rajinikanth and Amy Jackson in the lead roles, while Bollywood actor Akshay Kumar does antagonist role (Full Cast & Crew Details). The first look of 2.0 had Chitti (Rajnikanth) and Dr. Richard (Akshay Kumar) going head to head each other and there is a subtitle in the center saying " The world is not just for people". This inscription can be legitimized in light of the fact that the look of Akshay's part seems as though he is some sort of a shrewdness bird-man.
Story In Detail
The movie story begins with an old man committing suicide on the top of mobile phone tower. The scientists Dr. Vaseegaran (Rajinikanth) introduce his Robot Vennila (Amy Jackson) to the Robotics students. Very soon, mobile phones in the city started flying away from the stores and from the people's hand.
Vasigaran is called to investigate this case from government and Vasi starts to investigate the mystery behind the mobile phone fly away. Later, all missing mobile has become a giant bird and starts attacking the city, Vasigaran brings his robot Chitti. Now the ground is for Chitti versus giant bird. What is the behind the mobile phones missing? Who is the old man dies in the opening scene and what is the reason for his death? Are the rest of the story to be watched on the big screen.
View: Interesting Photos From 2.O
Cast & Details
Akshay Kumar Bollywood star joins hands with Shankar in 2.0, earlier it was said that international star Arnold Schwarzenegger to play the antagonist’s role. Dialogues  written by Jayamohan, Editing handled by Antony, sound works handled by Oscar Award Winner Resul Pookutty.
Including the team of Transformers popular director Mr. Kenny Bates and VFX works managed by the people who worked for Life of Pi namely John Huges and Walt from Taufilms. Bollywood actor Sudhanshu Pandey made his south debut through Ajith Kumar’s Billa 2. Sudhanshu joins 2.0 set and he plays as son of Dr. Bohra.
Mega Budget
Lyca the production house announced the movie was budgeted for Rs 450  Crores, which is huge to Indian cinema. It is releasing in 3D also with the experts across the globe. Superstar Rajinikanth went to the US for a special make-up test for the 'Enthiran' in the first week of December. Movie shoot kick starts from Dec 16th, 2015.
Release
First Look of the movie 2.O was launched on Nov 20th and the event was hosted by Bollywood director Karan Johar at YRF Studios, Mumbai. The audio was launched on 27 October 2017 at Burj Al Arab, Dubai. The movie scheduled to release on Nov 29th, 2018. Director Shankar wrote on Twitter, “Hi everyone.. at last, the VFX companies promised the final delivery date of the VFX shots. The movie will release on Nov 29th, 2018.”