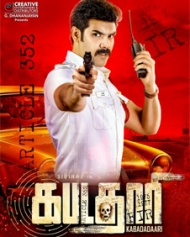 Kabadadaari is a Tamil neo-noir, thriller film written and directed by Pradeep Krishnamoorthy and it is a remake of the 2019 Kannada film Kavaludaari. The movie Kabadadaari stars Sibi Sathyaraj in the male lead role along with Nandita Swetha, Nassar, Jayaprakash, Suman Ranganathan, and Pradeep Krishnamoorthy in supporting roles. The movie produced by G. Dhananjayan, the music and background score for the movie composed by Simon K. King, with cinematography handled by Rasamathi and editing done by Praveen K. L. It was simultaneously made in Telugu as Kapatadhaari with Sumanth in the lead role.
Story
The film revolves around two cops, who work together to resolve a three-decade-old crime mystery. The film begins with a murder scene which dates back to 1970s. The story later shifts to the present time, which showcases the protagonist, a traffic cop who is trying to get a transfer to the crime department.
Just when he realises there's no hope, he comes across an unresolved crime case. The crime investigator in him is awakened and he decides to solve the mystery.
Release
The soundtrack of the movie was released on 18 January 2021, at an audio release event held in Chennai. The movie Kabadadhaari was released on 28 January 2021, coinciding with the occasion of Thaipusam.