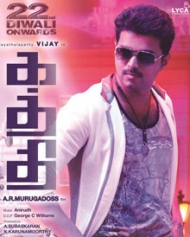 Kaththi (English: The Knife) is a Tamil action thriller film scripted and directed by AR Murugadoss. The film stars Vijay in a dual role alogside Samantha Ruth Prabhu. Neil Nitin Mukesh, Tota Roy Chowdhury and Sathish play supporting roles. Anirudh Ravichander composed the film's soundtrack and score.
Cinematography was done by George C. Williams and the film was edited by A. Sreekar Prasad. Lyca Productions and Ayngaran International bankrolled the venture and Eros International purchased the theatrical and audio rights for the film.
The movie has gone through censor certification process on Oct 11th and cleared with U certificate.
Live Chat: Chat, Rate & Share Your Opinion For Kaththi & Poojai
Story
Kaththi is all about, how Jeevanandham, a social activist fight against a monstrous MNC company to restore farming. The other Vijay, ‘Kathiresan’, a small time thief, but an ultra intelligent youngster, who  swaps position with Jeevanandham because of destiny, and leads the war with the corporate heads by, Neil Nithin Mukesh, which tries to steal the fertile lands from villagers.
The director A R Murugadoss takes up the plight of farmer's' struggle in increasingly globalized world. Instead of using this concept as a backdrop, Murugadoss has taken the time to portray the struggle and loading with statistical points without losing the audience.
Vijay looks as young as ever and displays interesting mannerism and his body language is top-notch. Vijay has shown minimal differences between the two characters with minor mannerisms in eye movements for Jeevanandam.
Click here to view interesting photos from Kaththi
Production
AR Murugadoss has indeed planned his schedules for his upcoming Vijay venture (tentatively titled Dheeran) meticulously and from the looks of it, he is very particular about finishing the project in 5 months, as planned. After two quick schedules in Kolkata and Chennai, team led by the Thuppakki director is off to Hyderabad.
The film was launched in Kolkata on Sunday (February 2) by its producers Ayngaran International in front of the famous Kalighat Kali temple.
The makers have officially announced the leading lady for Vijay. It`s none other than Samantha Ruth Prabhu. It will be the second biggie for Samantha after Anjaan with where she is paired opposite Surya.
Ayngaran International and Lyca Productions will be producing this big budget action packed entertainer.