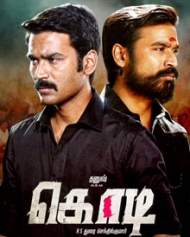 Kodi is a Tamil political thriller movie written and directed by R. S. Durai Senthilkumar and produced by Dhanush, their third collaboration after Ethir Neechal and Kakki Sattai. The film features Dhanush in dual roles alongside Trisha and Anupama Parameshwaran.
Kodi Story In Detail
Kodi movie story about the politics in the village based on power plant factory inside the village. Karunas, who wants to become a politician but due his inability  he failed to prove is talent in politics. Karunas burns himself to stop the factory in the village which pollutes the village.
Karunas's sons Kodi and Anbu (dual role played by Dhansuh) elder son Kodi gets into Politics and other into teaching.
Kodi fall in love with Rudra (Trisha) who is the most powerful politician in opponent party. The second one Rishi fall in with the egg vendor Malathy played by Anupama.
After certain stage both brothers comes to know that the factory still runs with help of ruling party where Kodi works for the same party. Kodi take this to his leader asked them to stop but they convince him and asked him to work for local election.
Did he wins the election against Rudhra and what happens to his love and the factory is rest of the story to be watched on big screen.
View: Interesting Photos From KODI
Read: Kodi Live Audience Review
Production
The film's music will be composed by Santhosh Narayanan, the cinematography and editing is handled by Venkatesh S and Praveen K. L. respectively.
Initially movie scheduled to start shoot in early December 2015, plans were delayed as a result of the 2015 South Indian floods and the schedule was delayed by two weeks. Subsequently the team held an official launch on 11 December 2015. Shooting started on 5 January 2016 and got wrappped on March 1st, 2016.
Release
The soundtrack released on 5 October 2016. The film is scheduled to release on 28 October 2016 coinciding with the festival of Diwali.