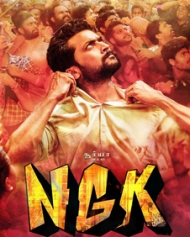 NGK is a Tamil action drama thriller movie, helmed by Selvaragavan. The movie stars Surya Sivakumar, Rakul Preet and Sai Pallavi in the lead roles. NGK is produced by S R Prakash Babu & S R Prabhu under the banner Dream Warrior Pictures. The music of the movie is by Yuvan Shankar Raja, for the lines of Vairamuthu.

The core plot of NGK revolves around an educated youth, who gets to know about the current political scenario. He who learns about the latest scenario decides to take a plunge into politics and what happens rest has been narrated in this film.

The first look of the movie and title NGK were unveiled on March 5, 2018. The second look poster of the movie scheduled to release on 22nd July on the eve of Suriya's birthday. The teaser was...