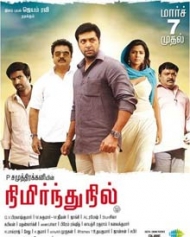 Nimirndhu Nil is an upcoming Indian Tamil action-thriller film written and directed by Samuthirakani featuring Jayam Ravi and Amala Paul in the lead roles. The film's soundtrack and background score were composed by G. V. Prakash Kumar.
Story Line
The movie features Ravi is a dual role, a 24 years old young man and a 48 year old man, and is a high voltage action thriller in which the lead role will turn a revolutionist to fight for the social causes.
Aravindan Sivasamy (Jayam Ravi) was brought up in an ashram run by a person (Nassar). The atmosphere that he grew thought him high moral values, disciplines, dignity, devotion etc. But when he comes out of the place, his belief and learning will be questioned by the cancerous system. It unsettles him and make him fight against the immoral cultures of the society.
An older identical appearing man steals his appearance and makes a Poomari. He decides to taken on corrupt bureaucrats and his friend (Soori) and journalist played by (Gopinath) joins him in his mission to fight against the corruption.
They successfully expose 147 government officials including a court judge and an MP are also caught taking bribes. Now, all those corrupted officials team up to take on Aravindan and his team. What happens next forms the interesting part of the story.