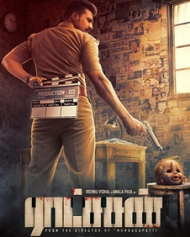 U/A | 2 hrs 50 mins | Action
Release Date : 05 Oct 2018
Cast : Vishnu Vishal, Amala Paul
Director : Ram D
Synopsis
Ratsasan is a Tamil action, mystery movie, directed by Ramkumar of Mundasupatti fame. The cast of Ratsasan includes Vishnu Vishal, Amala Paul, and Ramdoss in the lead roles. An aspiring filmmaker Arun (Vishnu) wants to make a movie on a serial killer, but turn a cop due to family pressure. Arun's uncle (Ramadoss) also a cop who worked with his father and guides him in the department.
Later Arun gets into the case of a girl murdered in an extremely unpleasant manner and Arun finds out that the murder could be connected to a previous murder. He starts the investigation of the serial killer, where finds very fewer clues from the serial killer. What happens next? Did he find the killer or not, is the rest of the story to be watched on the big screen.