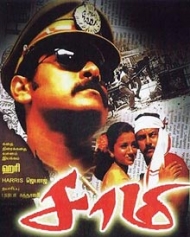 U | Action Drama
Release Date : 01 May 2003
Cast : Vikram, Trisha Krishnan
Director : Hari
Synopsis
Saamy movie is all about Arusaamy (Vikram) who is a Deputy Commissioner of Police of Tirunelveli who efficiently brings the city under control. Arusaamy arrives at Tirunelveli after being in exile for some years after being wrongly accused of bribery by corrupt politicians. At the outset, he pretends to be a corrupt cop by accepting bribes from the very influential Annachi.

Later Saamy starts to rebel against him and the rest is about how he succeeds in overcoming the corrupt politicians.