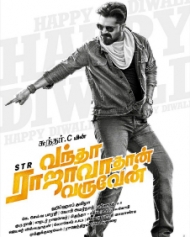 U | 2 hrs 36 mins | Action Comedy
Release Date : 01 Feb 2019
Cast : Silambarasan, Ramya Krishnan
Director : Sundar C
Synopsis
Vantha Rajavathaan Varuven is a Tamil remake of Telugu action comedy movie Attarintiki Daredi. The movie directed by Sundar C and produced by Lyca Productions. The movie stars Silambarasan in the lead role alongside Megha Akash, Prabhu, Catherine Tresa,Mahat Raghavendra, and Yogi Babu in supporting roles. Hiphop Tamizha composes the music for the movie, while Gopi Amarnath handles camera. The title of the film is taken from a dialogue by Silambarasan in Chekka Chivantha Vaanam.
Plot
Raja (Simbu) is a millionaire settled in US. Quitting his luxurious life, he returns to India and becomes a driver at his aunt's house. Answers to the question why he does so will form the crux of the story.