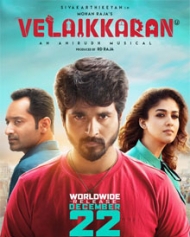 Velaikkaran (aka) Velaikaran is a Tamil action thriller movie written and directed by Mohan Raja. Velaikkaran (aka) Velaikaran movie cast includes Sivakarthikeyan, Nayanthara, Fahadh Faasil and Sneha in the lead roles, the movie has music composed by Anirudh Ravichander and cinematography by Ramji.
Story In Detailed
The film deals with how a young man from the slums fights against the food adulteration issue.
Arivu (Sivakarthikeyan) hails from a slum area and he is one such responsible youth, who wants to focus on the upliftment of his fellow beings and he works hard for the same, Arivu starts an local FM channel with the help of the area gangster Kasi (Prakash Raj).
Later Arivu joins in leading food factory, he meets Aadhi (Fahadh Fasil) a powerful marketing person. Later Arivu comes to know about the hazardous product that company delivers. He takes up a mission to fight such malpractices.
Arivu takes up a mission to fight such malpractices. He opposes Kasi and Aadhi to gets save the staffs and his slum peoples, did Arivu wins the battle with them is rest of the story to be watched on big screen.
View: Interesting Photos from Velaikkaran
The movie produced by RD Raja under his own banner 24 AM Studio. RJ Balaji and Sathish had been roped in as the comedians. Sneha Prasanna added to the movie. However, a source says that Sneha character’s is not that of Fahadh’s pair.
“Sneha was part of my first film, Hanuman Junction, in 2001. She was paired opposite Arjun in that Telugu film. I’m happy to be joining with her for the second time,” says Mohan Raja, who adds that the film is now in the pre-production stage.
The film began production untitled on 11 November 2016 in T Nagar, Chennai and shot in the area for up to a month. Later, on Feb 17th the title Velaikkaran was announced officially.
Velaikkaran movie review by audience: Live updates
The music of this movie composed by Anirudh Ravichander who also scored for Siva Karthikeyan's previous film 'Remo' which was also produced by 24 AM studios.