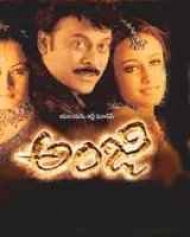 Chiranjeevi and Namrata Shirodkar are played the main lead roles along with Tinnu Anand, Nagendra Babu, Bhupinder Singh, M. S. Narayana are played the supporting roles in this movie while Ramya Krishna, Reema Sen and Rajlaxmi shakila are made special appearance in songs.

Anji is deals with the story of Aatmalingam which is situated in Himalayas that posses enormous divine powers. Once every 72 years, Akasa Ganga from sky flows into the Aatmalingam. The ones who can drink holy water of Akasa Ganga that flows through Atmalingam at that moment would become younger and remain eternal with...