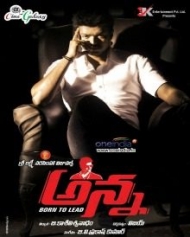 U | Action Romance
Release Date : 09 Aug 2013
Cast : Vijay, Amala Paul
Director : Vijay A L
Synopsis
Anna - Born To Lead is dubbed version of Tamil movie Thalaivaa and it is an Action-Drama-Thriller movie. The movie features Ilayathapalthy Vijay is male lead role and Amala Paul is female lead role in this movie. The movie is directed by A L Vijay and G V Prakash Scoring the music.

Thalaivaa, is the story of comman man who rises to a leader. Vijay was impressed by the movie 1947 A Love Story (A.L Vijay previous movie) and contacted the movie director for a new project. A. L. Vijay later narrated the Anna - Born To Lead story to Vijay and he agreed to play the role within fifteen minutes. Samantha Ruth Prabhu and Yami Gautam were initially approached for the lead female role.

Later Amala Paul was selected. Vijay Yesudas was reported to be...