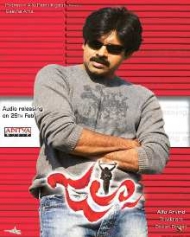 Sanjay Sahu (Pawan Kalyan) is a post-graduate from Osmania University and is working as a gym instructor. He is in love with Indu (Kamalini Mukherjee) who wishes to marry him. So she makes him meet her father (Prakash Raj), who is a police officer and also happens to be his old acquaintance....