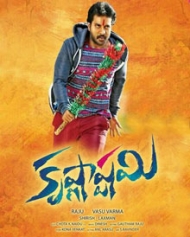 Krishnashtami movie is romantic comedy entertainer written and directed by Vasu Varma and produced by Dil Raju under Sri Venkateswara Creations. In which, Sunil, Dimple Chopade and Nikki Galrani are playing the lead roles.
Dinesh Kanagaratnam scored music for this movie.
Story

The film has a simple story of an NRI guy, who meets a girl on his way back to India, during his stop over at Europe. The unexpected delay of the flight results in brewing of love between the lead pair and sets a few fun sequences.

Though it was all a happy affair till then, a twist in the tale arises as the couple heads back to Hyderabad. How the hero fights back the circumstances and brings the tale to a happy ending, forms the rest of the story.
Release
The film is scheduled for a worldwide release on 19 February 2016.