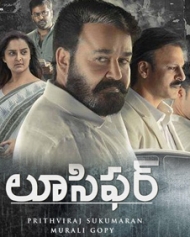 Action Thriller
Release Date : 12 Apr 2019
Cast : Mohanlal, Manju Warrier
Director : Prithviraj Sukumaran
Synopsis
Lucifer movie is a dubbed version of Malayalam movie with same title and it is a thriller-drama, directed by Prithviraj. The movie stars Mohanlal, Manju Warrier and Tovino Thomas in the lead roles. Lucifer has its script penned by Murali Gopy and the movie is being produced by Antony Perumbavoor under the banner Aashirvaad Cinemas.