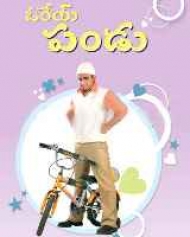 Romance
Release Date : 11 Feb 2005
Cast : Sachin, Sadali Sinha
Director : Sv Krishna Reddy
Synopsis
Orey Pandu is a romance based movie in which, Pandu (Sachin) is a man with no mental growth. Even after entering 20's, he would be studying in elementary school in which his mother (Bhanu Priya) works as teacher.

He accidentally bumps into a girl called Priya (Sandali Sinha). Priya is engaged to her family friend Vicky (Rajiv Kanakala). Vicky teases Pandu badly and ridicules him. Then Priya realizes that Pandu is her childhood buddy.

Then it is revealed that Priya's father (Benarjee) conspires with Vicky's father (Sayaji Shinde) to kill Pandu's father (Naresh) in the past. Pandu is given special powers by a self-abandoned ever-living baba. The rest of the story is all about how Pandu uses those powers to win the heart of Priya.