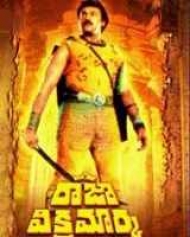 U | Action Drama
Release Date : 14 Nov 1990
Cast : Chiranjeevi, Amala Akkineni
Director : Raviraja Pinisetty
Synopsis
Raja Vikramarka  is a romantic action movie in which, Raja (Chiranjeevi) is the prince of Skanda Dweepam, a small kingdom. He is unable to live his own life, eat his favorite foods, or brush his own teeth.

His father (Satyanarayana) arranges his marriage with another kingdom's princess. She turns out to be nothing more than a sychophant.

One without a brain or spine of her own. He leaves the kingdom with his trusted friend, Jockie (Bramhanandam), in order to live his own life. In the modern big city, he finds a friend and works as a mechanic, during which time he saves a girl (Amala) from two attempts at her life.

Her uncle (Rao Gopal Rao) hires him as her bodyguard. Rao later reveals to him that he was in fact the assassin trying to kill her for...