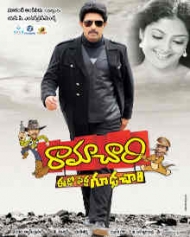 Comedy Romance
Release Date : 17 May 2013
Cast : Venu, Kamalinee Mukherjee
Director : Eeshwar
Synopsis
Ramachari is a romantic comedy entertainer movie. In which, Ramachari (Venu), who wants to become a police officer desperately. Though he tries numerous times to join the police department, he fails due to various reasons. But he does not loose his spirit.

He accidentally comes to know that the chief minister of Andhra Pradesh is under threat for his life. Since the police commissioner himself is involved in this ploy, he takes action into his own hands. This forms the story line of the film.