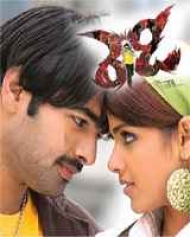 Comedy
Release Date : 19 Jun 2008
Cast : Ram Pothineni, Genelia Dsouza
Director : Srinu Vytla
Synopsis
Director Sreenu Vaitla, who worked with many top heroes, shook the Box Office with his last film Dhee recently. After the success of Dhee, he signed the dotted line for a film under the banner of Sravanti Movies.

He continued his laughing riot again and made the film a very big entertainer. Ram, the hero of the film shot into fame overnight with his debut film Devadasu. However, he failed to reach the expectations in his next film Jagadam.

In order to gain his lost image, he too worked very hard and Genelia, who turned a lucky mascot with the success of Bommarillu assisted him well in the female lead. As a whole, the audiences got yet another Sreenu Vaitla mark comedy film.