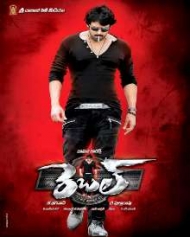 A | Action Romance
Release Date : 28 Sep 2012
Cast : Prabhas, Tamannaah Bhatia
Director : Raghava Lawrence
Synopsis
Rebel is a romantic action revenge drama, which revolves around the story of a happy-go-lucky guy. The hero (Prabhas) is the son of a good-natured mafia don (Krishnam Raju).

The hero becomes Rebel after his father is killed. How he takes revenge upon the people, who killed his father, will form the second half of the movie.

Apart from directing, Raghava Lawrence also handles the choreography, screenplay and music direction for the film. The film is being produced by J. Bhaghawan and J. Pulla Rao under Sri Balaji Cine Media banner.