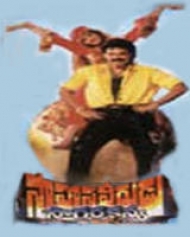 Action Romance
Release Date : 1996
Cast : Venkatesh, Shilpa Shetty
Director : K.Raghavendra Rao
Synopsis
Sahasa Veerudu Sagara Kanya is action romance based movie in which, Sahasa Veerudu (Venkatesh), the film's hero and Sagara Kanya (Shilpa Shetty), a mermaid. Malashree plays Ganga, Sahasa's cousin who loves him. They stay with some comedians in a house near the seashore. Kaikala Satyanarayana, the villain of the film, tries to acquire a ship which drowned with lot of treasure on-board.
He associates himself with a witch who helps him in finding the treasure. After a few attempts the witch finds out that the treasure can be recovered with the help of a mermaid.
Accidentally one day Sagara comes on to land from the water and loses her mermaid body. She turns out to be a beautiful woman. Whenever water is spilled over her, however, she turns back into a mermaid.
On land she...