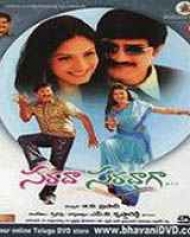 U | Comedy
Release Date : 27 Jan 2006
Cast : Srikanth, Sindhu Tolani
Director : Sv Krishna Reddy
Synopsis
Sarada Saradaga is a Comedy Tale movie Directed by S.V Krishna Reddy.Raghava (Srikanth) is the owner of beauty parlor. Girls who frequent to his parlor inevitably fall in love with him. Ali (Ali) - an assistant of Raghava - lies to these girls that Raghava is married in order to avoid them. Lavanya (Sindhu Tolani) falls for Raghava. But the moment she is about to propose him, Ali tells her also that his boss is a married guy. Incidentally Raghava too loves Lavanya. A disheartened Lavanya leaves Raghava. And he wants her back. Subba Rao (Rajendra Prasad) plots a plan to unite Raghava and Lavanya. The rest of the story is all about how Subba Rao plan boomerangs and there by shatters the relationship of three couples.