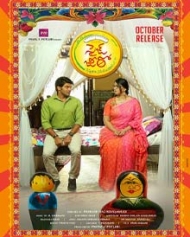 Size Zero movie is a bilingual romantic comedy entertainer directed by Prakash Kovelamudi, shot in Telugu and Tamil simultaneously. Produced by Prasad V Potluri. In which, Arya and Anushka Shetty are playing the main lead roles. Tamil version is titled Inji Iduppazhagi.
Story
Size Zero is all about a fat girl, Sweety (Anushka) and the kind of oddness she faces in the society while her parents struggles to get her a perfect match. The film makes it a strong point to tell us that sizes and shapes have nothing to do with a girl's likes and desires.
It showcases the day-to-day insults an obese girl faces in a society that stereotypes 'fat'. Can her appearance determine her dreams? What is it Sweety realizes in the run to get fit forms the story.
Release Date

The film is scheduled for a worldwide release on November 27th, 2015.