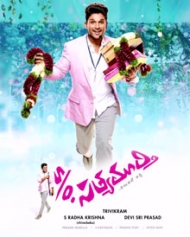 Son of Sathyamurthy is a action entertainer movie writing and directed by Trivikram Srinivas. In which, Allu Arjun, Samantha, Adah Sharma and Nithya Menen are playing the main lead roles along with Kannada superstar Upendra in important role in this movie.

It is a story of a principled guy, who values relations and follow the morals to live life in his way. What is the role played by his father in his life makes the plot of the story. Viraj Anand, a rich guy with all the luxuries and happiness comes to the diverged roads after his father's death.