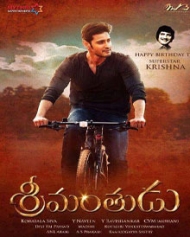 Srimanthudu is a stylish action entertainer movie in which, Mahesh Babu and Shruti Haasan are playing the main lead roles along with Jagapathi Babu and Rajendra Prasad in supporting roles.

Srimanthudu is about a rich guy called Harsha, who believes in doing what his heart says. Though he has everything in life at his foot step, there is something else he desires to accomplish. What sets his goal and what wonders his determination does forms the story.

Official First Look poster unveiled by the Mythri Movie Makers on 29 May 2015 and The first look teaser was released by Mahesh Babu in his twitter...