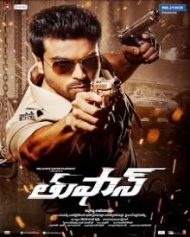 ACP Vijay Khanna (Ram Charan Teja) is a brutally honest police officer who has been transferred yet again by the system for chasing the corrupt underworld goons. He is in charge of a case where the key eye witness Mala (Priyanka Chopra) has seen a murder by Teja (Prakash Raj)'s Gang and refuses to co-operate. Teja is the head of an oil mafia operation and doesn't want Ria alive. Vijay manages to convince Ria to give a statement which makes her perpetrators come after her.

He gives her shelter in...